Conservative deer season in 2015 will continue to build population

Following a milder winter and a conservative deer season last year, hunters this fall may see more deer on the landscape during the archery deer season and while scouting for the Saturday, Nov. 7, firearms deer opener, according to the Minnesota Department of Natural Resources.

“Hunters will experience another conservative deer season in 2015,” said Steve Merchant, wildlife populations and regulations program manager with the DNR. “This year, they may see deer they can’t shoot, but this helps provide more opportunity in the future. We are continuing to build the deer population across much of the state, and we do that by harvesting fewer antlerless deer.”

For the 2015 season, one-deer limits remain in most of the state. This season will mark the second year of a management approach to rebuild deer populations based on goal setting and listening sessions that indicated a desire for more deer in many areas.

“For most hunters, it’s rewarding to see deer while hunting,” Merchant said. “So far in many areas, the season looks favorable for both deer sightings and the opportunity for harvest, based on reports from the fields and forests.”

Acorns have been dropping over the past couple weeks, providing food for deer and also giving hunters areas to focus on for hunting and scouting. Deer are shedding their reddish-brown summer coat in favor of the coarse grey coat of fall and winter. In many parts of the state, crop harvest is just beginning, which is a week or two later than normal.

Hunting season notes
Northwestern region
Deer numbers in the northwestern region appear to be up from last year. Last winter brought mild temperatures and little snow. A conservative 2014 deer season with a low number of antlerless permits issued has resulted in more does and fawns on the landscape. Hunters can expect to see more deer from the stand this year.

The northwestern region offers a variety of youth and adult deer hunting opportunities at most of the region’s state parks and at Rydell National Wildlife Refuge. The cities of Bemidji and Fergus Falls manage archery hunts, Red Lake Falls offers a deer hunt, several of the scientific and natural areas offer a variety of deer hunting opportunities, and there is a deer hunt for people with disabilities in Orwell Wildlife Sanctuary. Nearly two-thirds of the state’s wildlife management area acres are in the northwestern region and are open for deer hunting as well.

Northeastern region
In northeastern Minnesota, last winter wasn’t mild, but it was milder than average. However, compared to some other areas of the state, a deer population recovery in the region can be slower because of factors including a shorter growing season, fewer fawns per doe on average, fewer deer per square mile, winter severity and predation.

In the southern portions of the northeastern region, winter severity was not as extreme, but population numbers are still below target and are being managed for increases.

Duluth and some Iron Range communities will hold special in-town hunts to reduce the number of city deer. Permit areas around the Aitkin and Brainerd areas will generally be designated as lottery with a limited number of antlerless tags issued, and more permit areas will be restricted to bucks-only the farther one travels north. Permit areas in the moose range are designated lottery to maintain lower deer populations.

Hunters who frequent the Pillsbury State Forest in Cass and Crow Wing counties can expect to encounter active salvage logging operations and other cleanup activities throughout the fall and winter. The activity follows a severe wind storm July 12 that toppled trees in portions of the state forest and surrounding area between Brainerd and Nisswa.

Central region
Hunters in central Minnesota should expect to see more deer than last year although many of the permit areas will continue to have restrictive harvest regulations in order to achieve new population goals. The exception is the metro 601 permit area that will again allow for unlimited antlerless deer harvest.

Southeastern region
In the far southeastern permit areas (346 and 349), an intensive harvest strategy will allow for harvest of up to five deer. These permit areas will also have an early antlerless season that runsThursday, Oct. 15, to Sunday, Oct. 18, providing opportunity to harvest additional deer.

Opportunities abound for deer hunting in the southeast during the regular archery, two firearms and muzzleloader seasons. Once again, 300-series permit areas will be open to a special youth season over the weekend of the annual statewide teachers’ conference when many students do not have school from Oct. 15-18.

Southwestern region
In southwestern Minnesota, deer permit areas 234, 237 and 286 will have a youth-only antlerless season in 2015. With the exception of youth, veterans’ home residents and hunters 84 years or older, all other hunters are restricted to harvest legal bucks only in these areas. The DNR took this step to bring up deer numbers in these areas because even conservative antlerless quotas the past several years have resulted in antlerless harvests too high for herd growth.

With three duck hunting zones in effect in Minnesota, hunters in the Central and South duck zones are reminded of closed dates in those zones that split the season into two parts to provide more hunting opportunity later in the fall.

The waterfowl season in the Central Duck Zone (south of Highway 210) will be closed from Monday, Oct. 5, through Friday, Oct. 9, and then reopen Saturday, Oct. 10.

In the South Duck Zone (south of Highway 212), the waterfowl season will be closed from Monday, Oct. 5, through Wednesday, Oct. 14, and then reopen Thursday, Oct. 15, which coincides with a long weekend off for many students.

Goose season is also closed in the central and south duck zones when duck season is closed.

Opening weekend report
Over the opening weekend of waterfowl season that began Sept. 26, duck numbers were good and hunter numbers were similar to last year. Blue-winged teal, wood duck and mallard comprised most of the harvest, according to Steve Cordts, waterfowl specialist for the Minnesota Department of Natural Resources.

“As always, results varied throughout the state, but overall I’d say it was a very good opening weekend – especially with the shirt-sleeve weather, which isn’t conducive to duck hunting,” Cordts said.

“The outlook for the rest of the season remains good, athough there will be the typical lull until new birds migrate into the state,” Cordts said. “Migrant ring-necked ducks will soon begin to build in numbers in northern Minnesota. Teal and wood ducks will still be fairly common in southern Minnesota this weekend.”

Hunters in portions of southeastern Minnesota can harvest antlerless deer in an early antlerless season from Thursday, Oct. 15, to Sunday, Oct. 18, in deer permit areas 346 and 349 in Winona, Houston and Filmore counties.

“There are high deer densities in localized areas of southeastern Minnesota, and in these areas there will again be an early antlerless hunt,” said Steve Merchant, wildlife populations and regulations manager for the Department of Natural Resources. “Numerous private landowners in these areas are experiencing deer damage to agricultural crops, and they may need help from hunters to harvest additional antlerless deer.”

Hunters should be aware that public land is limited in the early antlerless hunt areas. Hunters need to ask permission to hunt private lands.

All deer harvested during this season must be tagged with an early antlerless permit. Hunters also must have a valid archery, firearms or muzzleloader deer license. 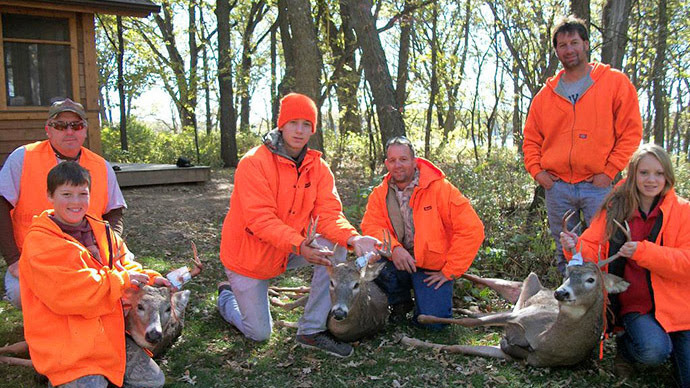 Youth ages 10-15 can participate in a special deer season that runs from Thursday, Oct. 15, toSunday, Oct. 18, in 27 permit areas of southeastern and northwestern Minnesota, including the 601 Twin Cities metro permit area.

Permit areas 111 and 203 are bucks only during the archery, firearms and muzzleloader seasons. Youth may take either-sex deer during the special deer season.

Youth must meet all firearms safety requirements, purchase a license and use the appropriate firearm for the permit area in which they are hunting. Youth may take a deer of either sex and may only take one deer during the youth season.

An adult mentor must accompany the youth but may not hunt or carry a firearm and does not need a license. However, in certain portions of permit areas 346 and 349 in Winona, Houston and Fillmore counties, the adult can participate in the early antlerless hunt while being a mentor if in possession of an early antlerless permit and a regular firearm license. Hunters and mentors must meet blaze orange requirements.

Public land is open, and private land is also open provided the hunters have landowner permission.

Participating in the youth deer season does not affect eligibility of youth to participate in the regular firearms deer season, but any deer harvested do count against the youth’s season bag limit. For more information, see page 34 of the DNR Hunting and Trapping Regulations Handbook under the heading Special Youth Deer Season, found on the DNR website at www.mndnr.gov/regulations/hunting.