FROM THE DNR: Special Request to Bear Hunters, Ely Poacher is Busted, and More

All photos from the MN DNR

Many of the collars have global positioning units that collect and store data that are downloaded by DNR researchers when they visit the bears in their dens.

“We’re asking that if hunters see ear tags or a collar on a bear, they refrain from shooting it,” said Dave Garshelis, DNR bear research biologist. “Long-term records of individual bears have been the cornerstone of information that helps the DNR monitor and manage the bear population.”

DNR researchers are monitoring about 20 radio-collared black bears, most of them in northwestern Minnesota, especially near Thief Lake Wildlife Management Area and the Agassiz National Wildlife Refuge. Additional radio-collared bears reside in and around Camp Ripley, north of Grand Rapids, and near the Cloquet Forestry Station.

“Hunters near these areas should be especially watchful for these valuable research bears,” Garshelis said. “Researchers have invested an enormous amount of time and expense in these individuals.”

Photos of some collared research bears are available on the DNR website atwww.mndnr.gov/bear.

DNR officials recognize that a hunter may not be able to see a radio collar or ear tags in some situations. For this reason, taking a bear with a radio collar is legal. 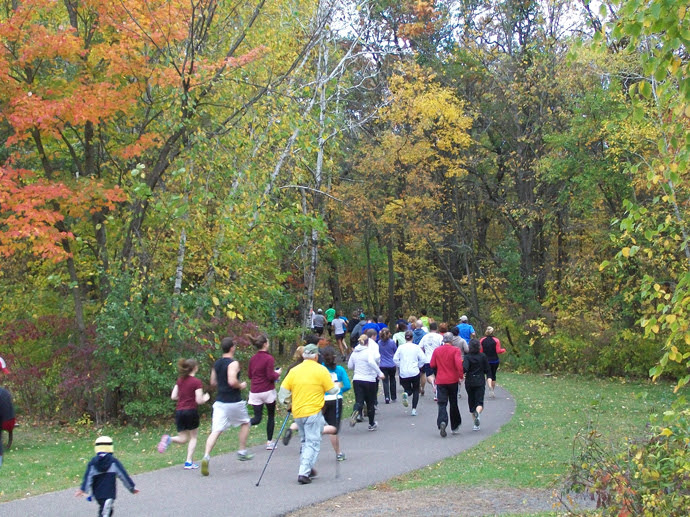 The Friends of Wild River State Park invite individuals and families seeking fresh air, exercise and fall color to sign up for the Otter Trotter 5K run/walk on Saturday, Oct. 10.

“It’s a wonderful time of year to get outdoors,” said park naturalist Mike Dunker, “and Wild River State Park has one of the most beautiful 5K courses in the state.”

Registration forms and a route map can be downloaded from the park website atwww.mndnr.gov/wildriver. They are also available at the park or by contacting Dunker at
651-583-2125, ext. 227, or michael.dunker@state.mn.us. Registration is $15 until Oct. 1 and $25 after that. The registration fee will include a T-shirt (while supplies last), with all proceeds going to the Friends of Wild River to help support park programs.

Participants can pick up bib numbers and T-shirts at the park from 8:30 to 9:45 a.m. on race day. The run/walk will start at 10 a.m., along paved and unpaved surfaces from the picnic shelter to the site of Nevers Dam, along the west bank of the St. Croix River, and past native prairie before finishing along a section of the park’s Old Logging Trail.

Awards will be given to the top finishers, and all those under age 12 will receive a prize.

Wild River State Park is located 15 miles east of North Branch and 12 miles north of Taylors Falls, just off of Highway 95 near Almelund. A vehicle permit ($5/day or $25/year) is required to enter the park.

For more information, including directions to the park, visit www.mndnr.gov/wildriver orwww.friendsofwildriver.org.

A group of anglers from Indiana and Illinois were recently charged with poaching fish near Ely, according to the Minnesota Department of Natural Resources. The case stems from a June investigation, and it marks a busy season for DNR conservation officers who have logged numerous angling violations since the May 9 fishing opener.

June 21 began as a normal day for Anthony Bermel, DNR conservation officer in Babbitt, as he conducted a routine patrol on Twin Lake south of Ely. While checking angling and boating activity, he noted three men either bailing water out or putting water into their live well. He asked them how the fishing was.

“They replied that fishing was good and they had caught their limit,” Bermel said. The men said they had also fished nearby Burntside Lake and Grassy Lake during previous week, but did not specify how many fish they had kept.

The number of fish and the restitution value of $1,435 brought a gross misdemeanor charge and seizure of their boat, motor and trailer. Their fishing licenses were also seized.

Earlier this month, the DNR reported that a different group of six Indiana anglers were charged with nearly $3,400 in restitution and fines of about $1,000 for possessing 676 fish over their limit on Upper Cormorant Lake in Becker County. They are scheduled to appear in court Aug. 31.

Anyone witnessing a fish or wildlife violation is encouraged to contact the 24-hour, toll-free Turn In Poachers (TIP) hotline at 800-652-9093. Cell phone users can dial #TIP. 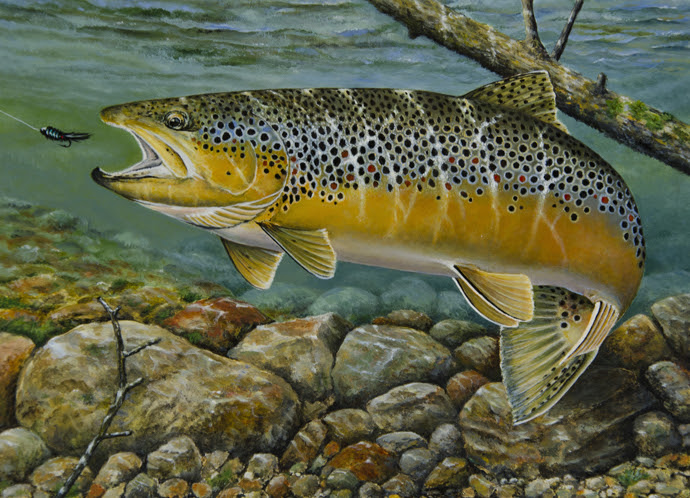 Duluth artist Dean Kegler has won the 2016 Minnesota Department of Natural Resources trout and salmon stamp contest with a painting of a brown trout. The painting was selected by judges from among 12 submissions for the annual contest.

Kegler won with his first entry into the contest in the 35 years that it has been held.
His artwork was previously featured on the 2009 pheasant stamp.

“Congratulations to Kegler for his winning entry, and thanks to all who entered this year,” said Brian Nerbonne, streams habitat consultant, who coordinates the contest.

The trout and salmon stamp validation is sold for $10 along with fishing licenses and is required for Minnesota residents age 18 to 64 and non-residents older than age 18 and under age 65 to fish designated trout streams, trout lakes and Lake Superior, and when in possession of trout or salmon.

For an extra 75 cents, fishing license purchasers can receive the pictorial stamp in the mail. A collectible stamp is available for $10.75, but is not valid for fishing. Revenue from stamp sales is dedicated to trout and salmon management and habitat work. For more information on trout fishing license requirements, see www.mndnr.gov/fishmn/trout.

The report summarizes roadside counts of pheasants, gray (Hungarian) partridge, cottontail rabbits, white-tailed jackrabbits and other wildlife observed in the early morning hours during the first two weeks of August.

The observations take place throughout the farmland region of Minnesota. Observers typically survey 173 25-mile routes, 154 of which are located in the ring-necked pheasant range.

The Minnesota Department of Natural Resources has named Bret Grundmeier its 2015 conservation officer of the year. He works out of the Hinckley station.

“Officer Grundmeier uses a common sense approach when taking law enforcement action, giving the honest person the benefit of the doubt. But when enforcement action is needed, he takes it,” said Col. Ken Soring, DNR Enforcement Division director. “When education is a better approach, he will use his knowledge and ability to help the person understand why they need to take corrective action.”

Soring added that Grundmeier’s familiarity of his station, knowledge of user patterns, working peak weekends and peak hours, provide for a strong enforcement presence and effectiveness in his area.

Graduating from South Dakota State University with a bachelor’s degree in agriculture/biology, Grundmeier worked as a wildland firefighter stationed in the Black Hills of South Dakota and as an officer for the Shelby County Conservation Board in Iowa.

In 2004 he was hired as a DNR conservation officer and stationed in Mora. For the last nine years, he has been in the Hinckley station.

Growing up on a dairy farm, Grundmeier knew he wanted to find a way to work outside.

“Throughout my career I found I enjoyed working in the natural resources field as much as I enjoyed being a police officer, so the position of conservation officer was a perfect fit,” he said.

Throughout the year he goes from spending time patrolling on a snowmobile and on frozen lakes, to patrolling area waters in a boat or kayak, to checking fall hunters from a pickup truck or ATV.

He also gets the opportunity to meet young people in his area while teaching at DNR safety classes.

“It’s amazing how many of these kids remember me, and are excited to come up and talk when they later see me working out in the field. That is definitely one of the more rewarding parts of the job,” Grundmeier said.

He was surprised when he was told about the awards. “Getting recognized in this way is no doubt a high point in my career,” Grundmeier said.

The Enforcement Division’s strategic plan can be viewed at www.dnr.state.mn.us/enforcement/sp/index.html.