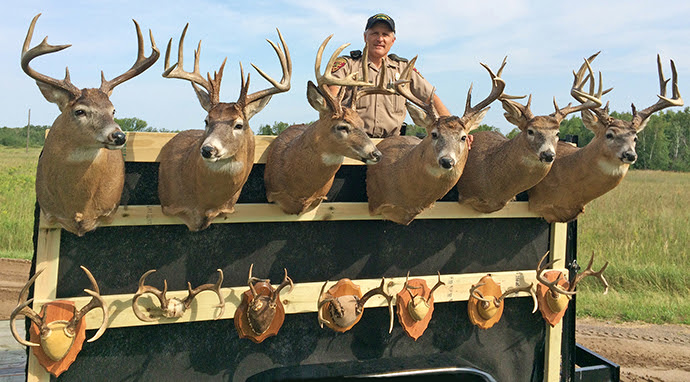 Conservation Officer Mitch Sladek is shown here with the mounts and plaques seized in the Zimmerman investigation. They are now included in one of the DNR’s Turn In Poachers (TIP) Wall of Shame displays.

A Zimmerman man recently pled guilty to a 2014 case of illegally taking multiple deer in the Sherburne National Wildlife Refuge.

On Nov. 1, 2014, Minnesota DNR Conservation Officer Mitch Sladek of Big Lake observed a woman and her daughter bypass a locked gate and enter the refuge pulling a two-wheel deer cart.

“I asked them who shot a deer,” said Sladek. “The woman said her husband, Michael Walz, had shot the deer and they were going to help him bring it out with the cart.”

When asked if it was a buck or a doe, the woman didn’t know. When asked if they bow hunt, she replied, “No.” Sladek checked DNR’s electronic licensing system and saw the woman had registered a number of bucks killed with a bow.

“I then traveled onto the refuge and found the two women and Walz, as well as a freshly killed
6-point buck that was untagged and had been illegally removed from the kill site,” said Sladek.

The officer checked Walz for a valid license, but was told it may “take a minute” since Walz had other licenses in his possession beside his own: his friend’s, his daughter’s and his father’s. Walz then validated and tagged the 6-point buck.

Walz and his wife later admitted to illegal party hunting, illegal transportation and using borrowed tags in an attempt to pass the deer off as legally killed animals. He further admitted that his wife, daughter and father were not with him when he had shot any of the deer.

Sladek travelled to the Walz home where he found six shoulder-mounted deer hanging on a wall, along with seven antlered wall plaques. Walz confessed to killing and transporting 13 deer illegally. Walz said that the deer were taken in the Sherburne National Wildlife Refuge or the Sand Dunes State Forest.

All of the mounts, plaques, as well as a pickup truck and a bow were seized as evidence. Walz was charged in Sherburne County Court with two counts of transporting illegally taken big game and two counts of soliciting/borrowing the big game hunting license of another person. Walz pled guilty to the charges on July 30.

A fine of $3,000 and sentence of one year in jail were stayed and Walz was placed on two years’ probation; however, court costs and fees totaled nearly $3,200. In addition, Walz received 80 hours of community service, cannot enter Sherburne National Wildlife Refuge or Sand Dunes State Forest, cannot hunt big game during a two year probationary period, had his Minnesota big game hunting privileges revoked for three years, and was ordered to write a public apology in Minnesota Outdoor News.

“This is an example of someone who is passionate about taking deer, but has lost appreciation of the animals hunted and respect of the laws protecting a resource that belongs to all citizens,” said Col. Ken Soring, DNR Enforcement Division director.

Minnesota is also among the 45-state compact that recognizes suspension of hunting, fishing, and trapping licenses. This means that illegal activities in one state can affect a person’s hunting or fishing privileges in all participating states.

The DNR’s mission is to work with citizens to conserve and manage the state’s natural resources, to provide outdoor recreation opportunities, and to provide for commercial use of natural resources in a way that creates a sustainable quality of life. A major part of that mission involves the work of conservation officers in gaining voluntary compliance with regulations through education and law enforcement.

Citizens can help protect Minnesota resources by mentoring new hunters, and by reporting game and fish violations to the Turn In Poachers (TIP) hotline at 800-652-9093. Cell phone users can dial #TIP. Informants can remain anonymous and may be eligible for a reward.

Need something to listen to while you travel for MEA break? Download our latest podcast! We broadcasted from the shores of the Rainy River. It's perfect for the drive to your hunting or fishing destination, or maybe on the airplane if you're taking a vacation with the family.