2015 MN Deer Season Set: What will the regulations be this year?

Hunters can expect another conservative deer season in 2015 as management continues to rebuild deer numbers across much of the state, the Minnesota Department of Natural Resources said.

“The 2015 deer hunting regulations will be quite similar to last year, with one-deer limits in most of the state,” said Leslie McInenly, big game program leader for the DNR. “Hunters should check the 2015 regulations early, because in the majority of areas, hunters will need to apply for a permit to shoot an antlerless deer.”

In 70 of Minnesota’s 128 deer permit areas, hunters must be chosen in a lottery to shoot an antlerless deer. Only bucks can be hunted in 14 areas. In 29 areas, hunters have the choice of shooting a doe or a buck. Bonus permits allowing hunters to shoot more than one deer may only be used in 11 permit areas and for some special hunts. In three southwestern areas, the DNR is restricting antlerless harvest to youth hunters only.

Hunters can buy deer licenses and apply to the lottery for antlerless deer permits starting Saturday, Aug. 1. The deadline to apply for the lottery is Thursday, Sept. 10.

“Given the mild winter for most of the state and reduced harvest last year, we anticipate that hunters will be seeing more deer when afield, and we are already hearing from people that they are seeing more deer this summer,” McInenly said. “We are continuing a conservative harvest approach in order to raise deer numbers consistent with our recent goal-setting process.”

The 2015 season marks the second year of a management approach to rebuild deer populations based on goal setting and listening sessions that indicated a desire for more deer in many areas.

Details on buying a license
All hunters who purchase licenses by Sept. 10 are automatically entered into the lottery if they declare a lottery deer permit area. Those who do not wish to harvest an antlerless deer are encouraged to purchase their license after the lottery deadline. Hunters may apply using both their firearm and muzzleloader licenses. If hunters are selected for both licenses, they must select the one season in which they want to shoot an antlerless deer.

Deer hunting licenses, lottery applications and special hunt applications are available at any DNR license agent, by telephone at 888-665-4236 or online at www.mndnr.gov/buyalicense. Lottery winners will be notified in October. 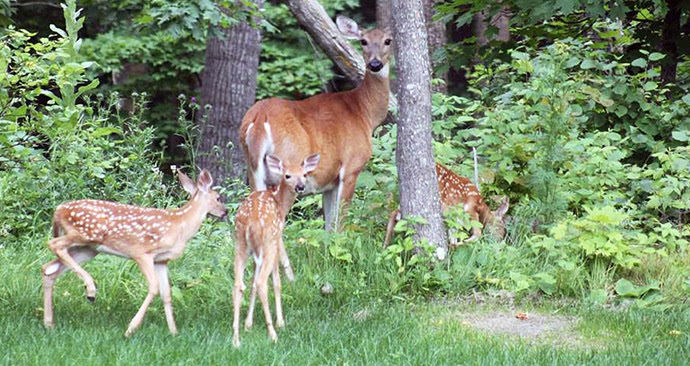 Reports of good white-tailed fawn numbers are coming in from around Minnesota as a milder winter and a conservative approach to the 2014 hunting season are already starting to show results.

Mid-summer reports from wildlife managers around the state place the overall deer population recovery on solid footing. However, during the 2015 season, conservative population management will allow deer numbers to rebuild across much of the state. One-deer limits will apply for most hunters during this rebuilding year.

For more information about the 2015 deer season, permit area maps and links to the 2015 Minnesota Hunting and Trapping Regulations Handbook, see www.mndnr.gov/hunting/deer.

Northwestern Minnesota
Deer numbers in the northwest region appear to be up from last year. Last winter brought mild temperatures and little snow. A conservative 2014 deer season with a low number of antlerless permits issued has resulted in more does and fawns on the landscape.

Abundant spring and early summer rainfall has provided excellent summer deer forage. Deer are feeding in the afternoon and evening in the open, grassy areas and along forest roads, escaping the flies and other insects in the wooded areas.

Doe and buck numbers seem to be moderately increasing in the Roseau, Baudette and Beltrami Island state forest areas. Fawn observations are difficult as they are just now getting big enough to be seen with does in the tall vegetation. Overall, buck observations are the same as last year or lower, with mostly younger bucks being observed.

Wildlife managers in the Thief River Falls, Thief Lake and Karlstad wildlife management areas are seeing more deer than in recent years, including a good mix of bucks, does and fawns. Fawns are still spotted, and there seem to be more twins and even triplets.

Deer numbers remain reduced but are recovering in the Skime area west of Thief Lake, where the DNR took aggressive action to eradicate bovine tuberculosis (TB) from the state’s livestock and wildlife herds (now considered to be TB free).

In the Bemidji and Park Rapids areas, deer numbers are increasing. There seems to be excellent reproduction and many large fawns have been observed. Buck numbers appear up from last year and some nice bucks have been seen.

In the Fergus Falls and Glenwood areas, deer population numbers remain about the same as last year, both in terms of fawns and adults. The few bucks observed have nice antler growth.

The Detroit Lakes area deer population appears to be up from last year. Many does, plenty of twin fawns and yearlings have been sighted. Only small bucks have been observed.

The northwest region offers a variety of youth and adult deer hunting opportunities at most of the region’s state parks and at Rydell National Wildlife Refuge. The cities of Bemidji and Fergus Falls manage archery hunts, Red Lake Falls offers a deer hunt, several of the scientific and natural areas offer a variety of deer hunting opportunities, and there is a deer hunt for people with disabilities in Orwell Wildlife Sanctuary.

Winter in the northeast wasn’t mild, but it was milder than average. However, compared to some other areas of the state, a deer population recovery in the region can be slower because of factors including a shorter growing season, fewer fawns per doe on average, fewer deer per square mile, winter severity and predation.

With that in mind, wildlife managers are reporting good fawn production overall with single and twin fawns widely reported. Every now and then, triplets are seen. Does appear to have come through the winter healthy enough to support the physical demands of nursing. Fawns are traveling with their mothers at times, are including more vegetation in their diets and appear to have healthy weights for this time of year. Bucks are sporting velvet-covered antlers right now and antler growth is good.

Good fawn production this spring has been a welcomed site in areas where winter severity was extreme in the far northern reaches of the state for three of the last four winters, and where deer populations had declined the most statewide.

In the more southern portions of the northeast region, winter severity was not as extreme, but population numbers are still below target and are being managed for increases.

Along the North Shore and throughout much of the region, last year’s fawns survived the recent milder-than-average winter, and there should be good numbers of yearlings entering the breeding population this fall. Permit areas in the moose range are designated lottery to maintain lower deer populations.

Duluth and some Iron Range communities will hold special in-town hunts to reduce the number of city deer. Permit areas around the Aitkin and Brainerd areas will generally be designated as lottery with a limited number of antlerless tags issued, and more permit areas will be restricted to bucks-only the farther one travels north.

Central Minnesota
Deer numbers are up in central Minnesota due to conservative harvest in 2014, coupled with one of the mildest winters in recent memory. Reproduction has been strong, with fawns being born in late May and early June. The lush vegetation may be making it hard to see deer this summer, but does that are observed in the fields are often accompanied by one or two fawns. Bucks’ antlers are noticeable and developing fast.

Deer are taking any succulent vegetation this time of year, and the browse activity on shrubs and tree saplings is obvious throughout the central region. Landowners who hunt deer and maintain wildlife food plots are saying the deer are numerous and browsing down the food plots as they grow. Many of the central Minnesota permit areas will maintain conservative harvest strategies in 2015. The Metro Deer Management Area (601) will continue to allow for unlimited antlerless harvest. A variety of special hunts, both archery and firearms, have been identified region-wide for 2015.

Fawns were commonly seen in mid-May, well ahead of the usual June 1 peak fawning period. Most does seem to have twins with them this year, with some reports of triplets. Bucks that have been observed are displaying normal antler development with velvet racks of decent size on mature animals.

Opportunities abound for deer hunting in the southeast during the regular archery, two firearms and muzzleloader seasons. Once again, 300-series permit areas will be open to a special youth season over the weekend of the annual Education Minnesota conference when many students do not have school from Thursday, Oct. 15, to Sunday, Oct. 18.

Special firearms hunts will be offered at a handful of state parks and at Zumbro Falls Woods Scientific and Natural Area. A special archery hunt will be managed within the city of Red Wing.

Each of these hunts has special regulations and deadlines for application, as spelled out in the 2015 Hunting and Trapping Regulations Handbook.

Permit areas 346 and 349 in the extreme southeastern corner of the state will again be managed for intensive harvest, as deer populations there are above goal. Crop damage complaints in these areas have been steady this summer as deer congregate to feed on soybeans and corn stalks. An area-wide early antlerless hunt will also be offered in October.

Southwestern Minnesota
The southwest region is seeing encouraging signs this year, as DNR staff continue to report sets of twins and some triplet fawns – and even two sets of quadruplets. These multiple fawns are a sign of a healthy herd, and back-to-back mild winters have no doubt helped.

This is a great time of year for families to view deer in southwestern Minnesota, especially does and fawns. Fawns still have spots but are active and growing. Buck deer have velvet antlers several inches long. An early morning or pre-sunset drive along a rural gravel road will increase the chance of spotting whitetails.

In spite of the good reports, three permit areas have continued to stay below deer population goal levels. As a result, areas 234, 237 and 286 will have a youth-only antlerless season in 2015. With the exception of youth, veterans’ home residents and hunters 84 years or older, all other hunters are restricted to harvest legal bucks only in these areas. The DNR took this step to bring up deer numbers in these areas because even conservative antlerless quotas the past several years have resulted in antlerless harvests too high for herd growth.