DNR announces temporary, seasonal fishing closures
To protect fish spawning areas, the Minnesota Department of Natural Resources (DNR) has begun to close certain portions of some Minnesota waters to fishing. The closings are routine and based on local conditions.

Closings occur each year as ice-out begins and waters begin to warm.

Watch the skies for pelicans migrating to Minnesota
Flocks of giant white birds are catching the eyes of outdoor enthusiasts across Minnesota, as once-rare American white pelicans migrate north to their nesting grounds across the state, according to the Minnesota Department of Natural Resources. 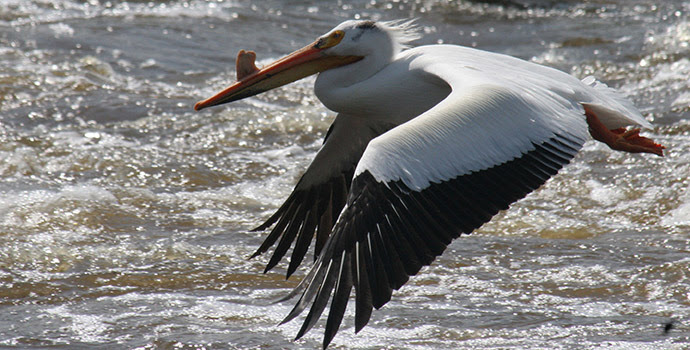 These pelicans are among the world’s largest birds and are easily recognized in flight.  Wingspans up to 9 feet, bright white plumage with black-edged wings and large, orange bills distinguish them from any other species.

“Pelicans often fly in evenly spaced lines or ‘V’ formations,” according to Lisa Gelvin-Innvaer, DNR nongame wildlife specialist. “Unlike swans or geese which fly with necks outstretched, pelicans fly with their necks doubled back against their shoulders. They often set up a rhythmic pattern of wing beats that ripple from the lead bird back to the end.”

American white pelicans were driven to near extinction in the early 20th century from human pressures. There were no reports of nesting pelicans in Minnesota for 90 years, from 1878 until 1968.

Conservation efforts and federal regulations have helped pelican populations make a slow and steady comeback. Still, they remain one of Minnesota’s “Species in Greatest Conservation Need.” This designation is given to animal species whose populations are rare, declining or vulnerable in Minnesota.

“The prairie pothole region of western Minnesota hosts 22 percent of the global population of this species,” Gelvin-Innvaer said. In Minnesota, the last survey estimated about 22,000 pairs of pelicans that nest at 16 sites on seven lakes across the state. This year, another statewide survey will provide an update.

The birds are highly social and live in large, dense colonies. They feed exclusively on small fish and crustaceans, and will work together for a meal.
“A group of pelicans will swim in a semicircle to herd their prey into shallow water,” Gelvin-Innvaer said. “Then, they’ll scoop up fish and water in their beak pouch, drain out the water and swallow their food.”

Gelvin-Innvaer advises that the birds are best enjoyed from a distance. “Pelican nesting colonies are vulnerable to human disturbance. Minimizing contact helps to conserve them as part of Minnesota’s natural heritage,” she said.

Pelicans and many other nongame wildlife species benefit directly from donations made to the Nongame Wildlife Checkoff on Minnesota tax forms or online at www.mndnr.gov/nongame/donate. The donations fund research, surveys, habitat restoration and education for more than 700 wildlife species that are not hunted.

Experts’ review of Mille Lacs management is presentation topic
Results from an independent review of the Minnesota Department of Natural Resources’ Mille Lacs Lake management, and DNR comments on those findings, will be the topic of a presentation from7 p.m. to 8:15 p.m. on Wednesday, April 22, at Garrison City Hall, 27069 Central St. in Garrison.

The event is part of a series intended to share biological information and answer citizen questions on important and timely topics related to the ecology and management of Mille Lacs Lake.

Venturelli will share results from the independent review, which began in early 2014 when the DNR solicited the input of national and international fish experts, as part of a broad approach to understand and improve the Mille Lacs walleye situation. The panel issued a report on its findings in mid-January, available at http://z.umn.edu/millelacswalleyepanel.

“The panel gave us an important independent review as we understand and address the decline of walleye in Mille Lacs,” said Don Pereira, DNR fisheries chief. “The results confirmed that low survival of young walleye is likely responsible for the decline.”

The DNR calls the events “Hooked on Mille Lacs: On the Road.” They complement the agency’s “Hooked on Mille Lacs Lake” quarterly newsletter. At these and future gatherings, experts will present on important and timely Mille Lacs topics. A facilitated question and answer session on the evening’s topic will give people the chance to ask questions and make suggestions for future discussions.

The meetings are part of an agency approach to more broadly communicate fish population information, research findings and rationale for management decisions. There is no charge for admission, and doors will open at 6:30 p.m.

The daily bag and possession limit will be two walleye, and anglers must immediately release all walleye 17- to 26-inches long. Only one walleye in possession may be longer than 26 inches.

These regulations are in response to a record winter harvest, during which state anglers harvested 140,000 pounds of walleye. Walleye regulations were tightened during the winter season and will remain restrictive for the open water season.

The DNR has not made a decision regarding an early season fishing closure on the Tamarac River. This decision will be made in late April when biologists are able to assess the status of the walleye spawning run.

Upper Red Lake harvest restrictions are necessary to comply with a joint walleye harvest plan agreement with the Red Lake Band of Chippewa. For more information on Red Lake and other fishing regulations, see www.mndnr.gov/regulations/fishing.

Reminder for final lake service provider trainings before ice-out
The Minnesota Department of Natural Resources is holding the last round of 2015 aquatic invasive species (AIS) training sessions for lake service providers. The training is required for businesses that install, remove, rent or decontaminate water-related equipment such as docks, lifts, rafts, boats, or sprinkler systems from lakes and rivers in Minnesota.

Lake service providers such as dock and lift companies, marinas, resorts, boat hauling and storage companies, outfitters and irrigators must attend AIS training and acquire a permit before completing work in Minnesota waters. The $50 permit is valid for three years and must be in possession while providing services.

“2015 is the first renewal year for the permit program, and more than 800 businesses have already completed or registered for one of the 32 trainings offered this year,” said April Rust, AIS training coordinator. “The remaining businesses that still need training have nine more training opportunities around the state.”

In these sessions, lake service providers learn about current AIS laws and how to integrate prevention strategies into their business practices.

Visit the DNR website at www.mndnr.gov/lsp to learn which businesses need a permit. To register, or for more information, contact Rust at april.rust@state.mn.us or 651-259-5706.

Small fires can be destructive
Fire managers with the Department of Natural Resources urge caution with all fires as of
April 1 there have been 309 wildfires in Minnesota that have burned 2,362 acres.

“Even a small grass fire has the potential to injure people, and cause damage to property and resources,” said Ron Stoffel, DNR wildfire suppression supervisor. “Last week, a small grass fire ended up destroying a homeowner’s garage.”

When the snow melts, some landowners want to burn ditches and fields to get rid of tall, dead grass. People can legally perform these burns with a burning permit from the DNR. But even with a permit, any fire has the potential to be destructive and lead to the loss of outbuildings, homes and natural resources. Small fires can even claim lives.

“Large fires get most of the headlines, and they often cause excessive damage,” said Stoffel. “But we lose more outbuildings and homes to small 1- to 2-acre fires than to big ones.”

With continued dry to moderate drought conditions throughout most of the state, and an early start to spring, Minnesota is likely to see more than the average number of wildfires during the next two months. Low relative humidity and windy conditions increase the risk for damaging fires.

In Minnesota, more fires occur in April than any other month with an average of 775 fires that burn 19,669 acres. Therefore, the DNR restricts burning between snowmelt and vegetation green-up. Right now burning restrictions are in place in most Minnesota counties and will extend to more counties in the coming weeks. Burning restrictions usually last between four and six weeks.

Burning restrictions do not apply to campfires; they are still allowed. Clear an area around the campfire, watch it continuously and make sure it is out and cold to the touch before leaving.

For up-to-date information on fire danger and burning restrictions, visitwww.dnr.state.mn.us/forestry/fire/firerating_restrictions.html.

The DNR compiled these Minnesota fishing facts in preparation for the 2015 fishing opener, which is Saturday, May 9.

Participation and the economy